Locating your business in the City of University City is a great step toward stability and growth. With approximately 35,000 residents, University City is one of the largest full service communities in the St. Louis Metropolitan area. Businesses make their home in University City for reasons which are proven to contribute to their success: access to the qualified work force within University City and surrounding areas; people dedicated to fueling the diverse economy; one of the most affordable cost of living rates among the nation’s urban centers; and unique elements like the U. City Loop, Center of Contemporary Arts and a diversity of ethnic businesses.

Whether you are seeking a pedestrian environment or a site along a major thoroughfare, University City can meet your location needs. The City offers excellent redevelopment opportunities and a variety of state and local economic incentives geared toward launching and sustaining business ventures.

University City lies at the western edge of St. Louis, Missouri, in the center of the Greater St. Louis Metropolitan region of Missouri and Illinois. Interstate I-170 and other primary roadways connect University City to the rest of the Metro region, with Lambert-St. Louis International Airport only minutes away. University City was one of the first suburban interfaces to Metrolink, the region’s light rail system which is used by thousands of riders each day.

The mix of suburban friendliness and urban elements has never been more embodied than in University City.

The City has extensive mature tree cover, more than 200 acres of park space and a nine hole municipal golf course. There is a unique character to the City’s neighborhoods, with a wealth of housing options as diverse as our residents. The area’s cost of living is less than the national average and by far the lowest of any Midwestern metropolis. For businesses, lower overhead costs convert into increased profitability and healthy growth potential.

Historic landmarks and districts are preserved and promote University City’s rich educational, cultural and economic history. The U City Delmar Loop is one such historic district that includes eclectic retail and record stores, restaurants and cafes, a movie theater, galleries, boutiques and nighttime entertainment venues. The American Planning Association named the Delmar Loop one of the nation's "Great Streets". Buildings along Olive Boulevard, another major commercial corridor, include some of the oldest surviving commercial structures in the region. Olive Boulevard's 4-mile long corridor boosts an array of opportunity from industrial sites to small to medium size office, retail, or restaurants.

University City, the St. Louis Economic Development Partnership, and the State of Missouri make available several economic programs to assist in the establishment or relocation of firms to the area.

University City can also provide assistance with finding appropriate commercial space for sale or lease or vacant parcels of land that may be available for development. We can also provide statistical data, undertake economic research, and assist with City regulations and permitting process. We are here to help U GROW! 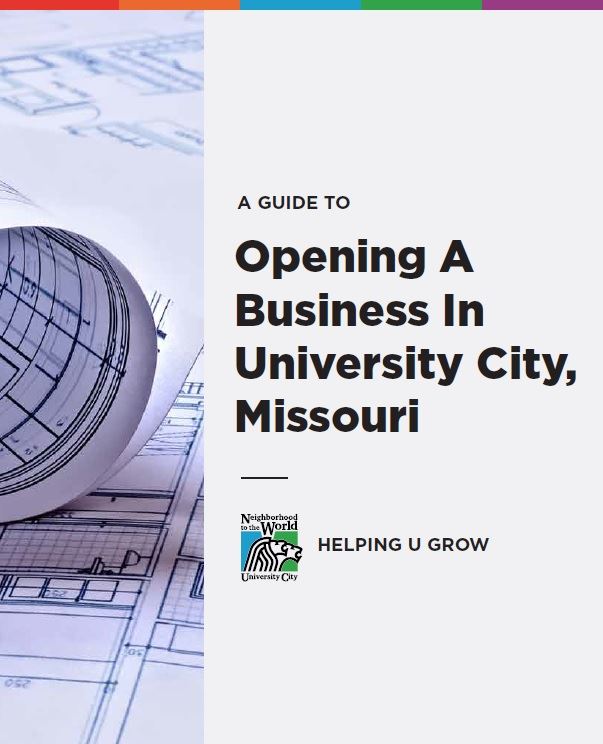 A Guide to Opening A Business in University City! We are here to help U GROW! DOWNLOAD IT TODAY.